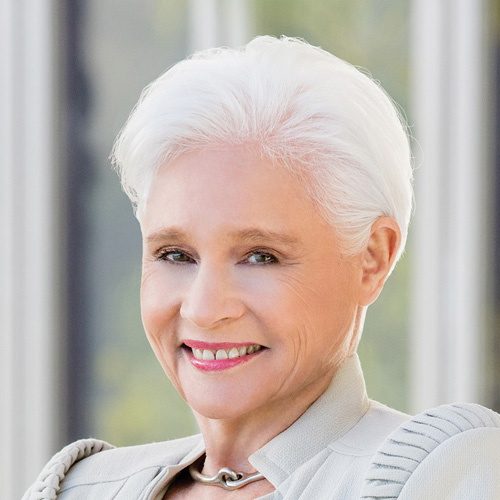 Joyce Rey has been called the “First Lady of Luxury Real Estate,” the “Billionaire’s Broker” and “Grand Dame of Real Estate” — an icon in her own right. After more than four decades working the highest echelons of international luxury real estate, she has amassed more than $4 billion (USD) in career sales and a roster of celebrity clients who revere her discretion. Negotiating historic estate sales is her specialty. She is known for marketing and selling some of the most expensive properties in the United States, including the Perenchio Estate, “Chartwell,” in Bel Air. Each year she breaks sales records, including her own.

Joyce Rey’s sterling reputation, market knowledge and respect among peers make her an unrivaled real estate force. Decade after decade, she maintains a consistent presence on “best of” lists for real estate production, as well as her professional and civic influence. Among her most recent accolades, she ranks among The Hollywood Reporter’s “Top 30 Real Estate Agents” and places in the top 50 of “THE THOUSAND” — a list of the best real estate agents in America by REAL Trends/The Wall Street Journal. A global luxury influencer and social media powerhouse, she also ranks No. 2 among Property Spark’s “Top Los Angeles Real Estate Agents on Social Media” and was named to The Los Angeles Business Journal’s “The Los Angeles 500: Most Influential People in LA County” two years in a row. Publications from Haute Living to The Real Deal and Variety have consistently recognized Joyce in their top broker rankings.

When it comes to luxury real estate authority, Joyce’s reputation in the media is unmatched. She is one of the most in-demand luxury real estate experts worldwide, featured in major media outlets including Forbes Magazine, The Wall Street Journal, NBC’s “TODAY” show, E! Entertainment News with Michael Corbett, CNN’s Money Shot, and multiple foreign television shows.

Joyce Rey’s legendary rise in Los Angeles luxury real estate began in 1974, after her first sale — the estate of Christina Onassis. A sale to famed acting teacher Lee Strasberg quickly paved the way for other celebrated landmark properties: Owlwood, Pickfair and the Harold Lloyd Estate, to name a few. In 1979, she was invited to establish the first company in the United States to specialize exclusively in estates valued at more than $1 million. Since then, through every fluctuation in the economy and the market, Joyce has consistently represented the most distinguished properties in the world.

Believing that evolution is the key to success, Joyce has mentored a talented group of young agents. Working together to provide five-star service that blends Joyce’s knowledge of the luxury marketplace with the latest technology, her team achieves top-team rankings each year — both nationally and within the elite Coldwell Banker Global Luxury network. With nearly 60,000 followers on Instagram, Joyce has managed to build a powerful social media platform that champions the glamorous lifestyle that she helps create for her many clients.

Despite the demands of her business, Joyce remains passionately dedicated to civic and philanthropic projects. She serves on the Southern California Executive Board for UNICEF, the Los Angeles Library Foundation Advisory Board, and the Coldwell Banker Community Foundation Board. She has also been actively involved with the Music Center’s Blue Ribbon and their board, the St. Joseph’s Center for the Homeless and Children Uniting Nations. Joyce Rey has been honored by the National Women’s Political Committee, the Anti-Defamation League, the American Cancer Society and a Lifetime Achievement Award from the Los Angeles Board of Realtors. She is actively involved in the Women Presidents’ Organization and has long been an invited member of the prestigious Trusteeship of the International Women’s Forum. Joyce continues to raise money and contribute to a large array of charities.