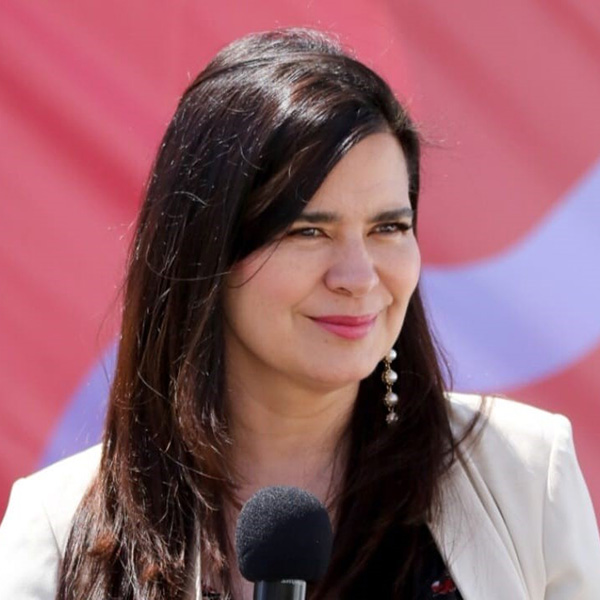 Consul General of Mexico in Los Angeles
Born in Mexico City, she holds a J.D. from the Escuela Libre de Derecho and has two master´s degrees, one in diplomatic studies from the Instituto Matias Romero (IMR) and the second, in defense and national security from the Colegio de la Defensa Nacional at the Secretary of National Defense (SEDENA). She continued her academic training at the Center for U.S.-Mexican Studies at the University of California, San Diego (UCSD). In addition, she was the first Mexican Foreign Service diplomat to complete the Diplomat in Residency Program at the American University (AU), in Washington, D.C, 2005.

She has a diploma in Israel History and Society Studies from the Interdisciplinary Center Herzliya at Reichman University in Israel, 2012, and another on Migration and Governance from the Centro de Investigación y Docencia Económicas (CIDE, 2017). Also, in May 2021, she obtained an Executive Certificate in Public Leadership, from the John F. Kennedy School of Government at Harvard University, Executive Education.
In the academic field, she taught Public International Law at the Universidad Iberoamericana (UIA 2000- 2001). Over the years, she has also conducted research and written about topics related to dual nationality and citizenship, national security and the integration of North America, intercultural understanding and cross-border diplomacy.

She has participated as a judge and president of the jury in the renowned Philip C. Jessup Law Court Competition´s national finals (2020, 2021 & 2022). In 2020, she was a member of the jury alongside the former Judge of the International Court of Justice, the Mexican diplomat Bernardo Sepulveda. Also, she participated in 2022 as a lecturer in the prestigious Cátedra Alfonso Reyes from the Instituto Tecnológico de Estudios Superiores de Monterrey (ITESM), a forum where she presented the concept of Cross-Border Diplomacy.

Since 2022, she became a member of the International Law Association (ILA) and Visionary Women organization.

In 1999, she joined the Mexican Foreign Service and over the years ascended through every diplomatic rank. At the Mexican Secretary of Foreign Relations, she served as Director of Nationality and Naturalization, a position from which she was responsible for promoting the recognition of dual nationality. These efforts culminated in the constitutional reform of 1997 and the issuance of the new Nationality Law of 1998; she was appointed Director for Protection Policies, a position in which she participated in the implementation of the mechanisms for border liaison and consultation between Mexico and the United States. In 2000-2002, she was the head of the desk for the United States of America Affairs.
Abroad, she first served as a Diplomatic Attaché at the Mexican Embassy in Washington, D.C. as a political counselor and Chief of Staff from 2002 to 2006. In September 2006, she was assigned to the Ministry of the Interior, as Director Deputy General in charge of the North America region.

From 2009 to 2012, she served as Deputy Chief of Mission and as Counselor for Economic Affairs, Trade and Cooperation for the Mexican Embassy in Israel; in 2012, as Counselor for Political Affairs at the Embassy of Mexico to the Kingdom of Belgium and the Mexican Mission to the European Union and from 2013 to 2016, as Deputy Consul at the Consulate General of Mexico in New York.
From 2016 to 2019, she was appointed as Consul General of Mexico in San Diego, California. In that position, she developed the concept of cross-border diplomacy.

As an alumna of the Escuela Libre de Derecho, she is the first woman to reach the rank of Ambassador (April 28, 2017).
Proposed by President Andrés Manuel López Obrador, she was ratified as Consul General of Mexico in Los Angeles by the Senate and took office on June 24, 2019. Her diplomatic work has been characterized by her commitment to achieving a dialogue between cultures. In this regard, since being appointed in Los Angeles, she has fostered an intergenerational and intercultural understanding between Mexicans, Mexican Americans and Americans of all cultures.
She speaks fluent English and has knowledge of French, Italian and Hebrew.